A Cake for My Dad

As you probably know by now, my love of cereal runs deep. Don’t tell cake his, but cereal is actually my favorite food. I’ll eat it for breakfast, lunch and dinner – in fact, eating it with my kids before bed has become a nightly ritual at our house. We call it our second dinner, and it’s a cherished time for talking about our day. I learn so much about their lives during our second dinner.

I wonder if that’s what was happening when my dad ate cereal with me each night before bed… hmm. This cake honors cereal, but more importantly it honors second dinners, late night talks, cherished memories, and dads. It’s Captain Crunch infused cake layers with Captain Crunch buttercream, Captain Crunch filling, smothered in a boiled-milk frosting. So good!

To get the flavor of the Captain Crunch cereal in the cake layers, we’re taking a page out of the Milk Bar cookbook and adapting Christina Tosi’s “cereal milk” to make our cereal infused milk.

When I first tested a cereal cake, my Fruity Pebbles Cake, I first tried using finely ground cereal in the cake, but the texture was all wrong! As I thought about how to get the Fruity Pebbles flavor into that cake, I remembered that Milk Bar had “cereal milk,” created by owner Christina Tosi.

Christina soaks the cereal in milk with a couple other ingredients and then strains the flavored milk for her panna cotta. The milk remains smooth but there’s now a fabulous cereal flavor to it.

For our cereal infused milk, we’re keeping it extra simple and just using milk and the cereal. No additional flavorings needed.

To make the crumble, you’ll crush some of the cereal, combine it with butter, milk powder, sugar, and salt, and then bake it for a bit to create a texture that remains crunchy once placed between the cake layers.

You’ll then take some of the cooled crumble and use it to make the buttercream. The Captain Crunch buttercream will be on the denser side, but it’s a great way to add more cereal flavor and compliments the boiled milk frosting really well!

For the boiled milk frosting, you’ll note in the instructions that you want to cook the flour with some of the milk for a minute or so. Do not overcook the flour and milk because it will get too thick. If it gets too thick, it will not blend well with the rest of the milk you’ll be adding and you’ll get chunks of the flour mixture.

If this happens, simply spoon out any chunks of the flour mixture and continue cooking the frosting. It will thicken, but takes a little time. Be patient and stay close to the pan.

Can I use a different cereal?

Yes, you can use a different cereal in this cake, but you’ll want to make sure it’s one with a lot of flavor (i.e. Fruity Pebbles, Captain Crunch Berry, Fruit Loops, etc.)

Can this cake be made ahead of time?

You can use either American Buttercream or Swiss Meringue Buttercream. SMB will be less sweet like the boiled milk frosting, whereas the ABC will definitely add more sweetness to the cake overall.

How do I bake moist cake layers?

Can I make this into cupcakes or a sheet cake? 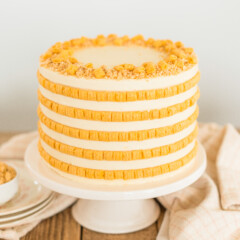 NOTE: You can use this recipe with any of your favorite cereals. Have fun with it!
Cuisine Cake
Course Dessert
Keyword Boiled Milk Frosting, Captain Crunch Cake, Cereal, Cereal Cake
Have you tried this recipe?
I’d love to see it! Follow @cakebycourtney on Instagram, take a photo and tag it with #cakebycourtney.