The wait is finally over! I’ve found you a gluten-free cake that I don’t just think you’ll like, I think you’ll love! Many of you have asked for a gluten-free cake for a while, but I needed to do some research and testing before I recommended anything because if I’m going to suggest a flourless alternative to my favorite chocolate cake, one that’s rich, flavorful and moist, I’m going to make sure you can hardly tell a difference.
As I researched different gluten-free cake recipes, I kept getting turned off by the use of coconut flour in so many of them. I’ve used coconut flour in my baking in the past and just haven’t loved it. It has a certain taste and texture you can notice and that’s definitely something I wanted to stay away from.

I finally came across this Decadent Chocolate Cake recipe by Mel’s Kitchen Cafe (which she originally found from the Good Dinner Mom website), and was immediately intrigued by the fact that it uses cooked Quinoa and doesn’t have an ounce of a flour-like substitute in it! I was also drawn in by Mel’s mouth-watering description of the cake, “This is definitely one of the most decadent, rich, moist cakes I’ve ever tasted.” Since I’ve made several of Mel’s recipes before, I knew I could trust this statement, and so, I got to work.

I decided to start by making the recipe exactly as Mel wrote it, and like her, I didn’t say a word to my family about what was in the cupcake. In fact, I went through three rounds of taste testing with my family, extended family and friends to ensure that this recipe would pass as unrecognizable gluten-free cupcakes.
So, in round one, both my husband and son, two of this world’s toughest cake critics, loved the cupcakes. My son had no idea they were any different from my normal chocolate cake recipe, and my husband, who’s favorite cake ever is my chocolate cake, did notice a slight different but had no problem finishing his cupcake and afterwards gave me the thumbs up.
In my second round, I decided to use coconut sugar instead of granulated sugar. You’ll see in the recipe below that I ground up the coconut sugar into a fine powder-like consistency. If you’ve used coconut sugar in your baking, you know that it has a grainy texture more like brown sugar than the finer texture you get from white sugar. I was afraid of getting a heavy, dense cake because of the thicker sugar granules, so I had the idea to grab my Magic Bullet and grind them up. I think this helped to keep the cupcakes light and fluffy, while still sweet and rich. Again, these cupcakes past the taste test with Ryan and Westin, as well as some friends.

In my final round, I added an extra egg and two scoops of my favorite chocolate protein powder by Ideal Fit (it’s the only one I’ve tried that doesn’t have a weird after taste, and I love that it uses minimal but quality ingredients – I have it every day, either in a shake or just as a post-workout drink), to see if I could make an even healthier cupcake while still maintaining the rich, decadent chocolate taste. My taste testers in this round included Ryan and Westin, along with my mom, my brother, my sister-in-law and a couple close friends – all of which were blown away by the fact that these cupcakes were made with Quinoa and protein powder. Again, I didn’t tell them before hand that there was anything different about these cupcakes, and again, they all gave me thumbs up, lick-the-plate-clean reviews.

So, now it’s your turn! Check out the recipe, give it a try and let me know what you think. If you’re aiming for gluten free, just leave out the protein powder. You could also substitute the milk with coconut milk, the butter with melted coconut oil, and the heavy cream with coconut cream for a vegan version. 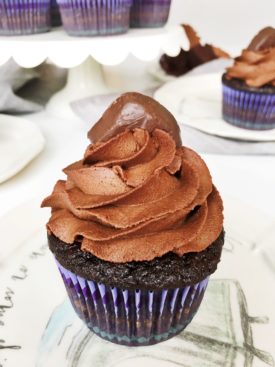 For the Chocolate Cupcakes/Cake

For the Chocolate Cupcakes or Cake

For the Whipped Chocolate Ganache