While it’s easy for me to jump from Halloween to Christmas without skipping a beat, I really do love Thanksgiving. Thanksgiving food is some of my favorite: homemade rolls, stuffing, and sweet potato casserole. (Gimme all the carbs!).

A good sweet potato casserole is probably my most favorite dish on Turkey Day. I’ve tried a variety over the years, but my go-to version is simply made up of mashed sweet potatoes, brown sugar and toasted marshmallows and pecans.

Thinking about all those amazing flavors and textures, it only seemed fitting to throw them into a cake.

Mastering a delicious sweet potato cake was priority number one for me. Sweet potatoes help give the cake moisture and flavor. It’s just a matter of getting the right amount.

Last year I created a butternut squash cake that was to-die-for. I roasted the butternut squash to get it nice and soft and then used about three cups of mashed squash in the cake batter. Once you add all the sugar and other ingredients, you don’t have an overwhelming vegetable flavor – just enough to hint to the butternut squash, but not so much that you think you’re eating it as a dinner side 😉

With a good foundation already in hand, I decided to use the butternut squash cake as the base for this cake.

Are you dying over this color?! I love how brightly colored this cake turned out just from the natural color of the sweet potatoes. It screams “Thanksgiving” to me!

And you know me, I love a good crunch in my cakes. Similar to my Butternut Squash Cake, I added toasted pecans between layers. I also added the toasted pecans to the buttercream, in the form of a nut butter. You guys! I think you’ll go nuts over this one (pun totally intended)!

Truly, the combination of flavors and textures in this one is a homerun, if you ask me! I hope to see it on your Thanksgiving table or next gathering. I have no doubt it will be a huge hit!

I know many of you or your loved ones have nut allergies you have to be mindful of when baking. I’d hate for you to miss out on this cake because of the pecans, so here are some alternative buttercream flavors I think would be awesome with this cake: 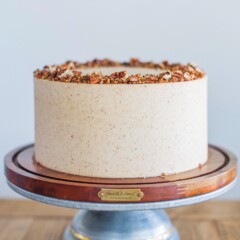 For the Marshmallow Filling

For the Pecan Buttercream

Cuisine Cake
Course Dessert
Have you tried this recipe?
I’d love to see it! Follow @cakebycourtney on Instagram, take a photo and tag it with #cakebycourtney.