Hello, friends! I’m so excited to be back from spring break and here on the blog with you! I know it’s been a minute (ok, maybe more than a minute) since my last new recipe. I can’t tell you enough how much I appreciate your patience. For some crazy reason, I thought I’d be able to get my cookbook pictures shot and create new recipes. HA! I definitely overestimated my abilities and the hours in a day.

With pictures complete, and almost all of the writing done, it’s time to fill CakebyCourtney.com with new recipes. I have so many!!!

First up! Disney’s Grey Stuff Cake, inspired by the Grey Stuff at Disney World. Have you had it? It’s a light and smooth whipped dessert – that is, of course, grey in color. There’s a lovely vanilla flavor, but also a hint of chocolate. Not too much though. It’s typically served on top of a scalloped cookie, but I had it at Gaston’s Tavern in the Magic Kingdom on top of a chocolate cupcake. It was divine!

It should be no surprise by now that when I travel, I’m also looking for cake inspiration. This trip was no exception and this Disney fan favorite dessert was definitely going to be my next challenge.

As I researched The Grey Stuff, I learned that Disney actually shared a recipe for it. Their ingredients include vanilla pudding, chocolate pudding, Oreos, milk and Cool Whip. I was surprised, to say the least. Having just had The Grey Stuff, I didn’t think it tasted anything like a whipped pudding. I also noticed that at Disney World, The Grey Stuff piped beautifully, but in the recipe Disney shared, it was the opposite. It looked deflated.

Despite my concerns, I tried the Disney recipe so I could compare the flavors and textures to the real deal. It WAS NOT the same. At all!

I ended up doing some more research and learned that Disney ACTUALLY makes a whipped panna cotta base for the Grey Stuff. Okay, I thought! That makes a little more sense.

Round Two and Three

For my next round of testing, I made panna cotta and tried the whipped version a couple ways, both of which used gelatin to help stabilize the mixture. Unfortunately, I wasn’t happy with either version and scrapped the idea completely. And not just because it didn’t taste right – I also wanted to make this copycat recipe easy and not overly complicated.

I was headed down the wrong path.

I gave myself a night to think about it and ended up back where I originally started before I had even ventured out on exploring my options – a stabilized whipped cream base. No pudding. No panna cotta.

Oreos, no matter how small I crushed them, still gave the Grey Stuff black specks. Disney’s Grey Stuff DOES NOT have black cookie specks. Oreos also gave the mixture more of a brown color than grey.

The black cocoa powder, on the other hand, blended in beautifully to create this gorgeous grey color, with no specks to be found.

The key to getting the right texture (one that you can pipe with), is the whipping cream you use. I tried a couple brands, with different percentages of fat. The best version I came up with was when I used Darigold 40% whipping cream. Anything less than 40% won’t create as thick of a cream. If you can find something with more than 40% fat, by all means, use it! The more fat the better!

To get this grey, you’ll want to use black cocoa powder. This is different than dark cocoa powder and something I also use in my Black Chocolate Cake and Black Buttercream. It’s definitely worth having around for these cakes and anything you want that Oreo cookie flavor for.

Don’t want to make a layered cake? No problem! You can turn this recipe into cupcakes or a sheet cake.

Don’t forget to follow my go-to tips for getting your cakes to rise and bake well: 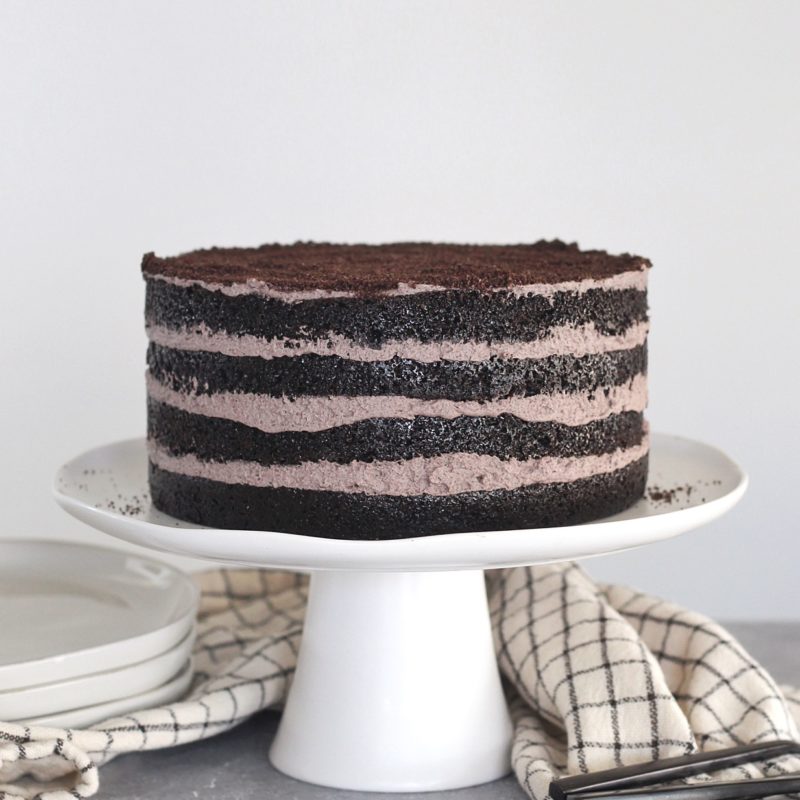 For the Oreo Chocolate Cake

For The Grey Stuff

For the Oreo Chocolate Cake

For The Grey Stuff