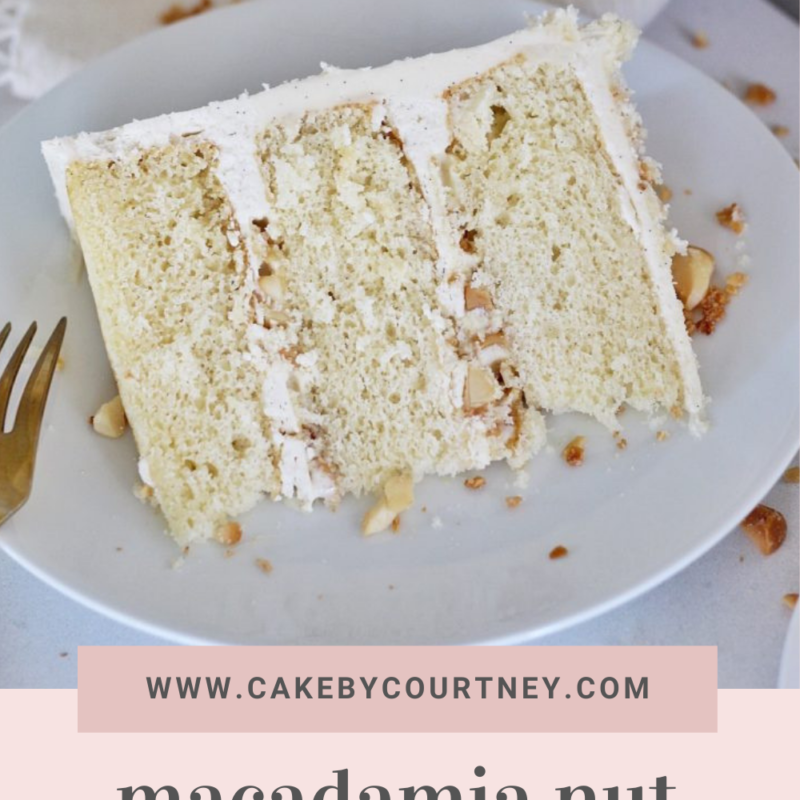 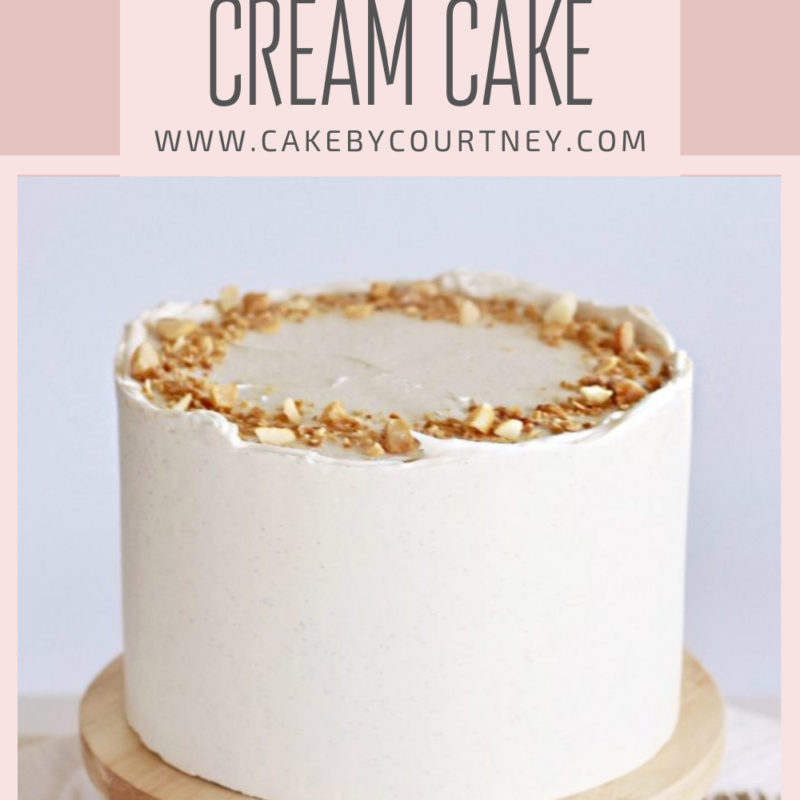 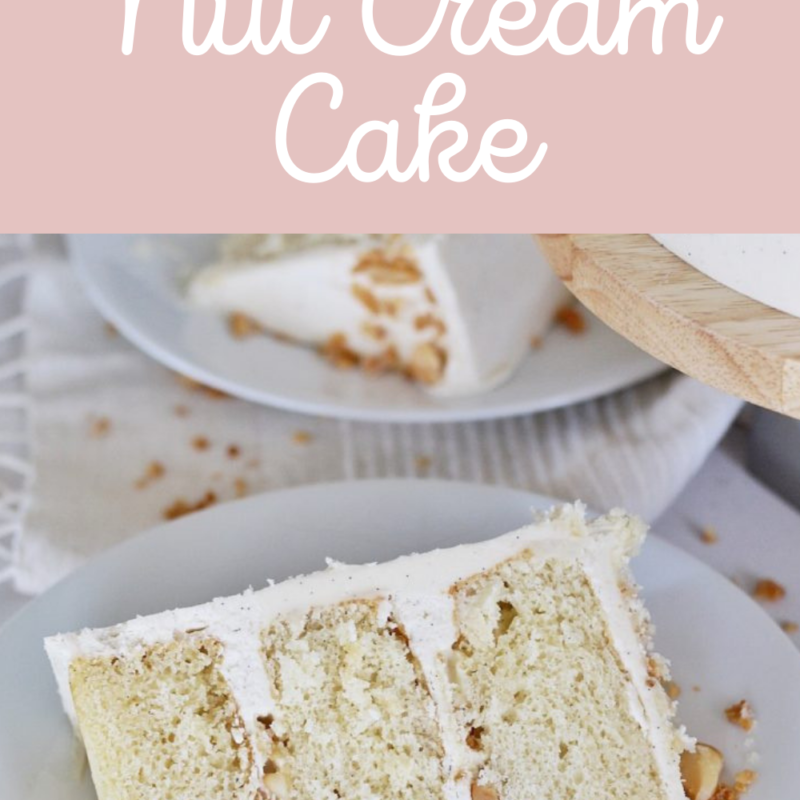 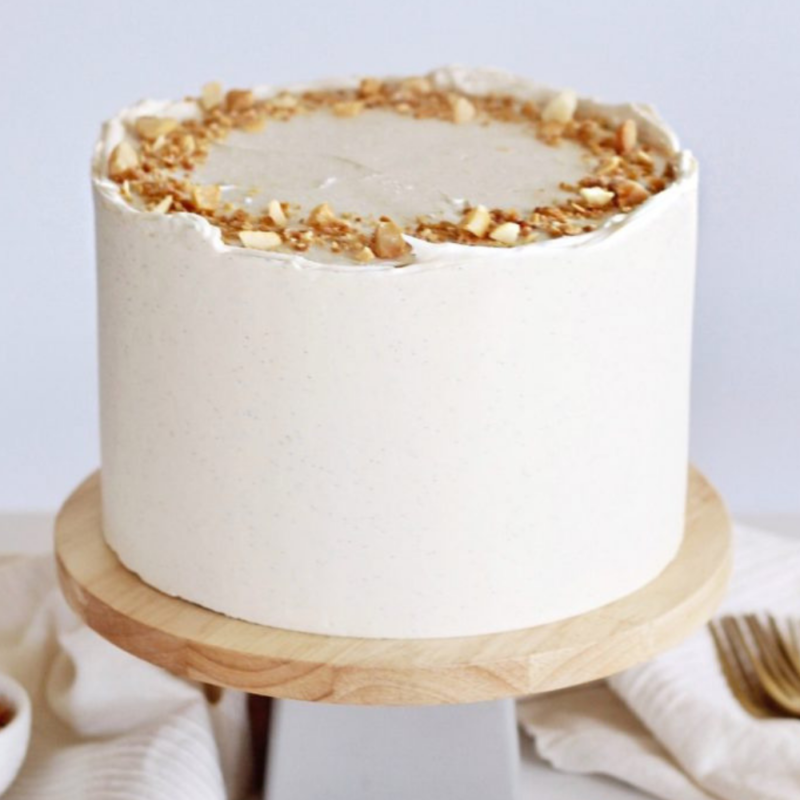 Summer is already flying by thanks to our back-to-back family vacations. We didn’t intend to do them so close together, but both Ryan’s family and my family schedules could only line up at this time. So, we were able to go to Oahu with my mom and my siblings for a week, come home for a week, and then jetted off to join Ryan’s family in Oceanside for a week. We’ve had an absolute blast, but I gotta say, it feels SO good to be home!

After our trip to Oahu, I spent the one week at home baking away in my kitchen. If you were following along on Instagram, you know I was obsessed with the Macadamia Nut Malasadas from Leonard’s Bakery in Honolulu and used my new-found obsession to inspire this cake. The macadamia cream filled donut from Leonard’s is honestly one of the tastiest treats I’ve ever sunk my teeth into. If you’re headed to the island, getting malasadas from Leonard’s is a must!

Getting the macadamia nut flavor in the cream was my first challenge. The cream in the malasadas was thick and creamy, but only had a slight hint of macadamia nut. I wanted my cream to scream macadamia nut!

I love the cream filling I made in my Verden’s Beste Cake a while back, and knew it would be the perfect starting point for the macadamia nut cream. In the original recipe, I call for two cups of milk. So, naturally, I thought I could replace the regular milk with store-bought macadamia nut milk. Turns out, macadamia nut milk is kind of hard to find and isn’t very flavorful. It reminds me a lot of almond milk. Kind of thin and bland.

After sampling the macadamia nut milk and deciding the flavor wasn’t strong enough, I decided to make my own milk – with toasted macadamia nuts. Toasting the nuts helps bring out the flavor and creates an even nuttier profile.

Don’t be afraid to make your own nut milk. It’s honestly so easy! You’ll simply toast your macadamia nuts with some salt, soak them in macadamia nut milk or other milk (almond, cashew, or even regular milk), puree it all and then strain to get the milk out of the puree. The full instructions are below, but plan to make this part of the recipe and the custard ahead of time.

After you’ve made your macadamia nut milk, you’re ready to make your custard. The custard is a simple recipe of egg yolks, sugar, corn starch and your nut milk. They key to making the custard thick and creamy is to slowly add the milk to the egg yolk mixture and then letting the entire mixture thicken for a while over the stove.

Again, this is something you’ll want to make ahead of time so the custard has time to set and cool in the refrigerator. Plan on making it at least a day before you put together the cake.

Also note that you’ll wait to add the whipped cream to the custard until you’re ready to assemble. I mixed mine together too early and it ended up being thinner than I intended. If you look at the Verden’s Beste Cake, you’ll see it can actually get pretty thick, but it’s certainly not ruined if it’s on the thinner side like mine. Either way, the flavor is going to knock your socks off!

I absolutely love this cake and frosting with the cream filling. They’re both light and flavorful, and really let the cream shine. I think you’re going to love this cake! 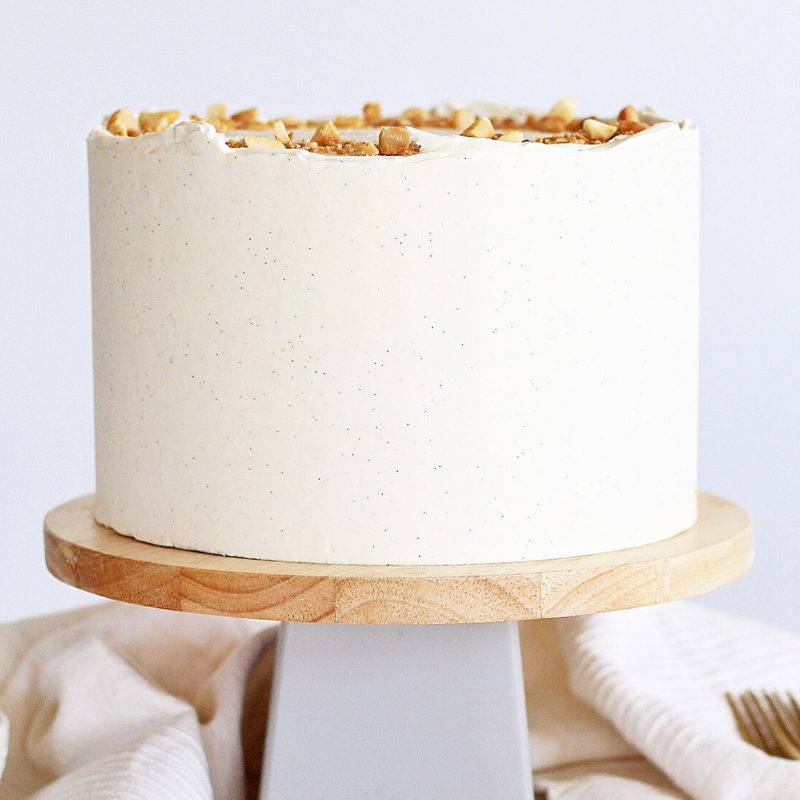 FOR THE MACADAMIA NUT CREAM FILLING

FOR THE TOASTED MACADAMIA NUTS

FOR THE TOASTED MACADAMIA NUTS