Sign up for cake recipes and blog updates straight to your inbox!

Be the first to know about exclusive Cake by Courtney deals and announcements. Sign up here!

I’m excited to start a new week with a new cake. Today’s cake is inspired by another vintage recipe. I ordered a few more books from ETSY, and one of the collections happened to be books from Canada, one of which was written by the Canadian flour brand, Robin Hood. They’re known for their pre-sifted all-purpose flour. As I scrolled through the book, this Cherry Almond Cake caught my attention pretty quickly. I’ve never done these flavors together!

My first attempt, as always, was using the exact recipe from the cookbook. I wasn’t wild about using maraschino cherries in the cake batter but went with it. (Something about the texture of those cherries… not my fave).

But who knows? Maybe I’ll be pleasantly surprised. Plus, I think it’s important to always try someone else’s recipe, as is, so you know what it’s supposed to taste like before you make changes.

As I expected, I didn’t love the cherries in the cake. But it wasn’t just the cherries. There was something about the texture of the cake that was off for me too.

It ended up taking me three additional rounds of baking to get this cake where I knew it needed to be. For rounds 2 and 3, I was using cake flour, a full cup of butter (instead of 1/2 cup butter and 1/2 cup shortening), played around with the eggs and kept the temperature low, per the original recipe.

The end result for both of those rounds was a sunken cake with a texture that was not tender enough.

I never mind a failed attempt, though. It’s the thought of the learning from my mistakes that gets me even more excited for the finished product that I know I’ll eventually get to.

So as I thought about rounds 1, 2 and 3, I thought back to the Edna Lewis recipe I posted on my Instagram account the other day. (You can check it out HERE). Edna’s cake was very similar to what I knew this cake was supposed to taste like, minus the flavorings. I decided to return to her recipe and compare it to what I was working with here from Peter Pan Flour.

One thing I noticed right away was that Edna was using all-purpose flour. I had been using cake flour.Not sure why I just reach for that first. I think I was just thinking that instead of sifting my all-purpose flour, I’d use cake flour and skip that step. Well, I know better!

I should have used all-purpose flour.

I should have also cut down on butter right away. One cup of butter was too much for the amount of flour and sugar in this recipe.

So with Edna’s recipe as my base, I added some almond extract, vanilla extract and lemon zest and baked the cake at a higher heat than the cookbook suggested and got the exact cake I had hoped for. It’s definitely a denser cake, but it’s so tender and delicious. You’ll want to just eat the cake on it’s own!

To add the cherry element, I made cherry almond compote with fresh cherries, almond extract, and lemon juice. Don’t be afraid to double this recipe. It’s so tasty and would be a delicious addition to a sandwich or avocado toast!

The buttermilk whipped cream is one that I used on my Strawberry Rhubarb Crumble. I love how the tangy buttermilk pairs with the tart cherries. 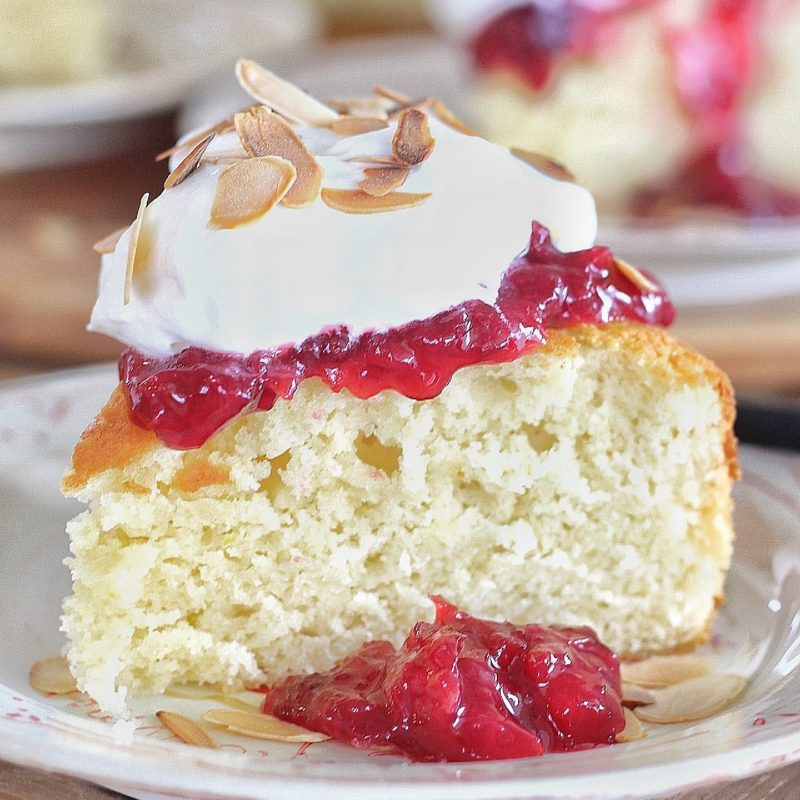 FOR THE COMPOTE (best to make a day ahead)

The Most Delicious Classic Carrot Cake

How to Bake Moist Cakes From Scratch

Cake Basics: How to Schedule Your Cake Making