I know it’s not a Monday, but I couldn’t wait (and I don’t think you could either) for this recipe to go live! Let me introduce you to my Seven Layer Bar Cake, also known as, my birthday cake.

This decadent, Seven Layer Bar Cake is inspired by the popular 7-Layer Bars (or Magic Bars, to some). A traditional 7-Layer Bar is made up of seven ingredients:

To turn this classic treat into a cake, I used all the flavors to inspire elements of the cake.

I hope you love this seven-layer bar cake as much as we did!

Make sure to check out my video tutorial below for tips on how to stack and decorate this seven-layer bar cake. And, follow me on Instagram @cakebycourtney for more tips and recipes on all things cake! 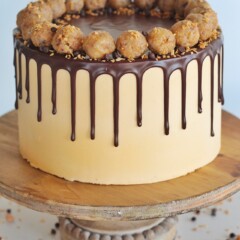 FOR THE FILLING (adapted from Milk Bar)

Cuisine Cake
Course Dessert
Keyword Butterscotch Buttercream, Coconut Cake, Seven Layer Bar Cake
Have you tried this recipe?
I'd love to see it! Follow @cakebycourtney on Instagram, take a photo and tag it with #cakebycourtney.