Celebration, Cake and a Pink Carpet

We recently made a quick trip to Los Angeles to attend the Swan Princess 25th Anniversary Party, where I had the opportunity to judge a Swan Princess themed cake competition. Talk about a fun night! We all got fancy, walked the “pink” carpet and enjoyed a night of celebration.

A Day at Disneyland

The next morning we headed to Disneyland for the day. We got to the park right when it opened and stayed until it closed. It was packed but we had a blast!

One of my favorite things about Disneyland is the treat selection! (I doubt you’re surprised to hear that – haha.) There are certain sweets I get every time I visit, but during this trip I decided to try something new – the Peanut Butter Sandwich from Pooh’s Corner and the Main Street Bakery. I had heard about this treat for years, but Disneyland took it off their menu for a while and I could never find it – until now! It’s back!

This little bar is full of everything I love in life! There’s a graham cracker layer, some kind of whipped peanut butter filling and a chocolate shell. Simple and incredible. I got one bar to share, but we quickly realized one bar wasn’t enough. We all went back for another… and with that kind of reaction, I knew these flavors would be a winning cake combination.

When I’m coming up with a new cake flavor, I’ll often work off a recipe for one of my other cakes that has a similar texture I’m going for. In this case, I knew my Biscoff Cake layers would be a great base for the graham cracker cake. In the Biscoff Cake, you’ll crush the cookies into a fine, crumb-like consistency and add them to the batter for flavor and texture.

Note: The graham cracker crust can sometimes be hard to cut into. So, when you cut the cake, make sure you use a sharp knife!

My peanut butter frosting was a no-brainer for this cake. It has nearly the same consistency as the filling from the Disneyland bar. Plus, it’s simply one of the best things you’ll ever put into your mouth! Win, win!

The last element I wanted to mimic from the Disneyland bar was the chocolate shell. I added chocolate ganache between the layers, but I also wanted to get that crisp chocolate shell on the outside of the cake. A chocolate drip (which has cream in it) wouldn’t harden like I wanted.

As I brainstormed ideas to get the chocolate shell on the entire cake, I thought about using Magic Shell (which is an ice cream topping), but decided instead that I could create my own Magic Shell with melted chocolate.

To get the chocolate coated around the entire cake, I thought it would be fun to try rolling the cake in the melted chocolate, just like I’ve done with sprinkles. Take a look at the video to see how it’s done. I also explain it a little more in the instruction notes.

I originally planned to smooth out the sides, but after rolling the cake and then pulling it away from the chocolate, decided I loved the texture I had created.

The chocolate set just like Magic Shell does on ice cream and gives the cake the perfect finishing touch. You’ll have to let me know what you think of this one, especially if you’ve had the bar at Disneyland! 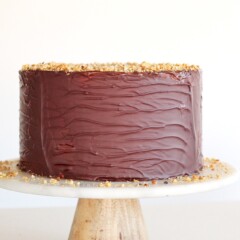 FOR THE CHOCOLATE SHELL

FOR THE CHOCOLATE SHELL

Cuisine Cake
Course Dessert
Keyword Peanut Butter Graham Cracker Cake
Have you tried this recipe?
I'd love to see it! Follow @cakebycourtney on Instagram, take a photo and tag it with #cakebycourtney.