Case in point, I asked her what kind of cake she wanted for her birthday, and without hesitation, she said to me, “peanut butter s’mores.” Not just a s’mores cake. Not just a regular peanut butter cake. A peanut butter s’mores cake! It was pure genius. This is literally the kind of cake I dream about! (I’ll admit now, I’m a little biased toward this cake because I love peanut butter. Hmm, love might be talking about my relationship with peanut butter too lightly. I’m obsessed with the stuff. It’s a main food group in my diet. I’ll add it to just about any other food. Don’t judge.) Anyway, with that secret out, I’ll just say I was so excited to make this cake, and eat it with my sister! I knew we would both appreciate and savor every bite together!

To make this wildly rich and delicious cake, I looked up several different recipes and ultimately decided to piece together my own creation in order to get what I was looking for. You’ll see I’ve used my go-to dark chocolate cake for the base. Its bittersweet flavor balances nicely with the more savory flavor of the peanut butter filling and the sweetness of the marshmallow frosting. And I love the baked in graham cracker layer! It adds a little contrast in texture to the rest of the cake.

Oh, it’s just so good… and like I said, seriously rich!

Also, I know this looks like a lot of steps, but don’t let that scare you off from making this cake. When I’m making a cake with several steps like this, I spread out the baking over a few days. With this cake, I made the cakes a few days before the party and froze them until I was ready to assemble. Next, I made the peanut butter filling and ganache a day ahead. You can store the peanut butter filling and ganache in an air-tight container at room temperature for a day, or in the refrigerator for a few days. If you decide to stick them in the fridge, let both get to room temperature before you spread them on the cake during assembly. Finally, I made the marshmallow frosting day of and frosted the cake right away when it was finished. 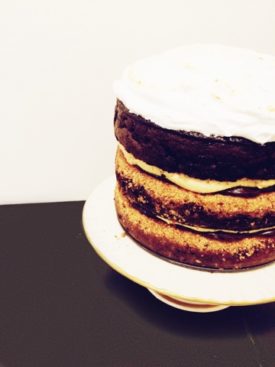 FOR THE CHOCOLATE CAKE

For Marshmallow Frosting (from HeatherChristo.com)

FOR THE CHOCOLATE CAKE

For the Peanut Butter Filling

For the Marshmallow Frosting

10 Podcast Episodes Every Foodie Will Love