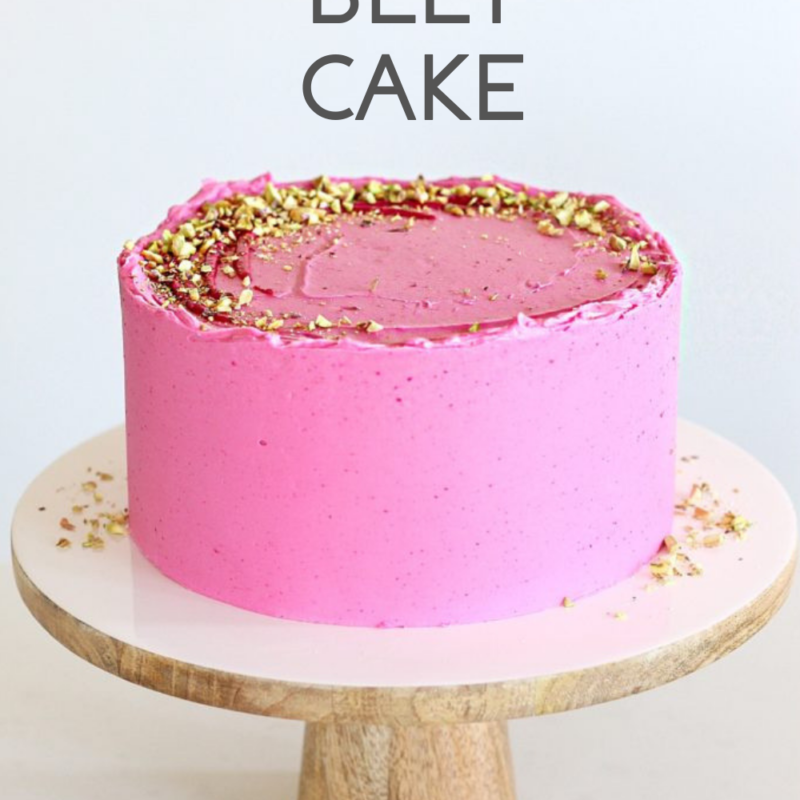 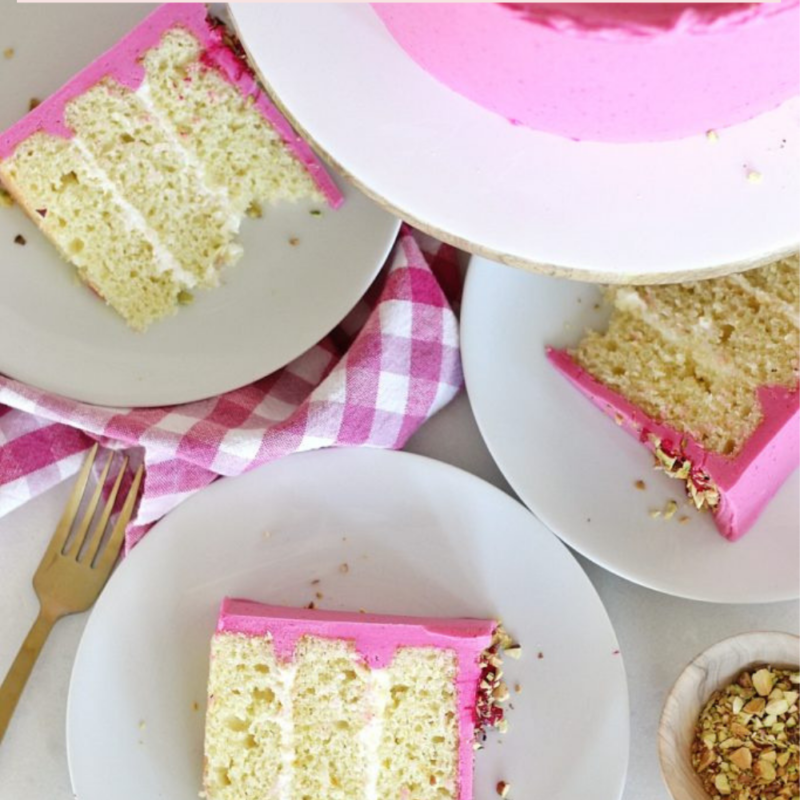 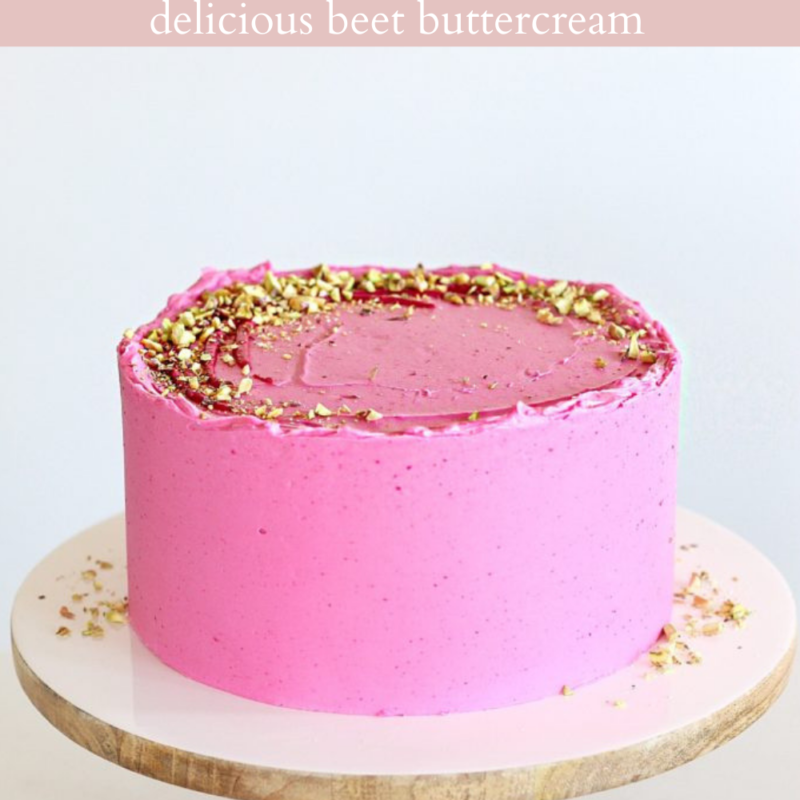 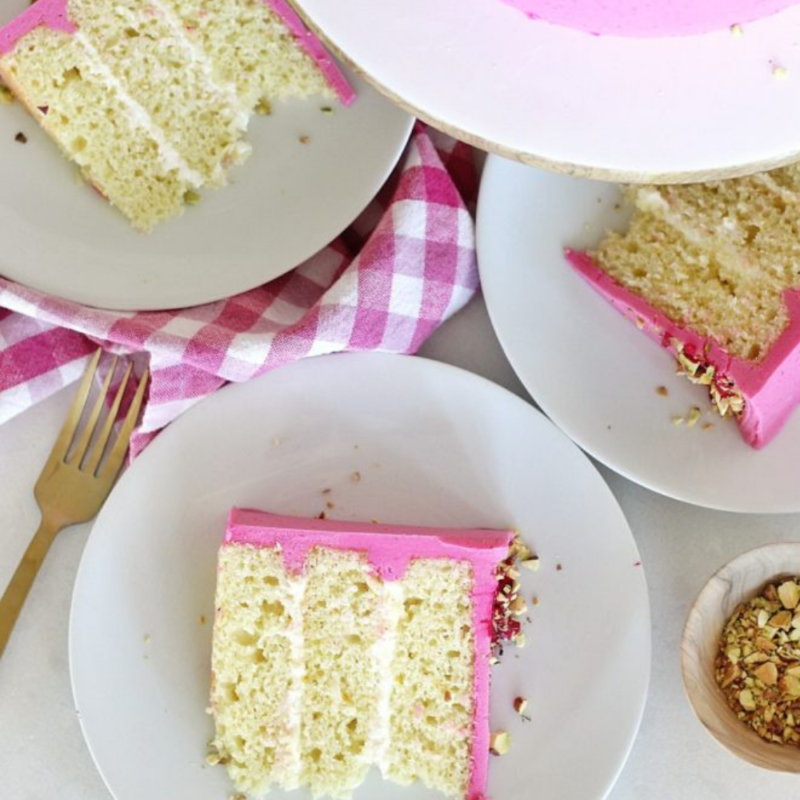 Ricotta Beet Cake – rich and moist ricotta cake layers, filled with a whipped homemade ricotta filling, and covered in the most gorgeous and delicious beet buttercream.

Like each and every one of my cakes, I’m just as excited to share this cake with you as all the others. I know the flavor sounds “interesting,” as most of you have described and it is. It’s so interesting and it’s so good!

I love getting cake inspiration from unlikely places. Remember my Lemon Ricotta Olive Oil Cake? That one is based off an appetizer from ABC Kitchen. My Butternut Squash Gingersnap Cookie Cake is based off ice cream from Van Leeuwen. My Triple Chocolate Pecan Pie is based off Ryan’s mom’s famous Pecan Pie she serves every Thanksgiving. In my mind, just about anything can be a cake flavor!

The idea for my Ricotta Beet Cake comes from a donut. And not just any donut. Literally one of the best donuts I’ve ever had. It’s the ricotta beet donut from Doughnut Project in West Village, New York. During a visit to New York several years ago I made my first visit to the Doughnut Project and got a dozen donuts to try. Ryan and my friends thought I was a little crazy getting a ricotta beet donut but I love trying the most unique flavors. And it turns out, it was hands-down my favorite flavor in the bunch. Ever since, I’ve had the flavors on my list of cakes to make.

After making the Ricotta Olive Oil Cake, I knew I had the perfect base for this cake. The cake layers have two cups of ricotta cheese in them. It provides and incredibly moist and rich texture in the cake. However, something I really noticed about store-bought ricotta while making that cake is how grainy the texture is. You’ll never notice it in the cake layers. It blends beautifully. But I knew there was no way store-bought ricotta would work in the filling I wanted to recreate from this donut.

The filling in the Doughnut Project donut is smooth and creamy. No grainy texture whatsoever!

So, I knew I had to make homemade ricotta! I had been told it was pretty easy to tackle, so I went for it. And low and behold, it’s SUPER easy to make and so much better than store-bought ricotta.

I’ll walk you through all the steps to making your own ricotta below, but a few things you’ll need:

I would suggest making the ricotta a day or two ahead of time so it has time to thicken and chill.

The homemade ricotta will be used in the filling. Once the ricotta is made and has chilled for a couple days, you’ll simple puree it with a bit of orange extract and powdered sugar in your food processor.

I then fold in a little heavy whipping cream right before I start to assemble my cake. Don’t add the whipped cream too early because it kind of deflates if it sits in the fridge too long.

As I mentioned above, you can use store-bought (or homemade) ricotta for the cake layers. The recipe for the cake layers is nearly identical to my Olive Oil Ricotta Cake. I switched out the olive oil for grapeseed oil, which is a light oil (not as heavy as EVOO or vegetable oil). If you don’t want to use grapeseed oil or can’t find it, you can use light olive oil. I also switched lemon zest for orange zest. Orange is an incredible companion to beets! I think you’ll love the hint of orange throughout the entire cake.

Alright, on to the beet flavor! I was so excited to incorporate beets into this cake – not because I love beets, but because I love a challenge! Doughnut Project has a beet glaze on their donut. It’s not a strong beet flavor, but you pick it up just a bit with each bite. The beets also create a beautiful, rich magenta color!

I roasted my beets with some olive oil, thyme and orange zest. These flavors aren’t super strong but are a great accent to the beets. After roasting the beets, you’ll puree them with some orange juice. You’ll then add a couple tablespoons of the puree to the frosting and then use the remaining puree to make a sweetened beet sauce to serve with each slice of cake. I chose not to add the beet puree in the cake itself so people could choose whether or not they want that extra flavor. I think you’ll want it! 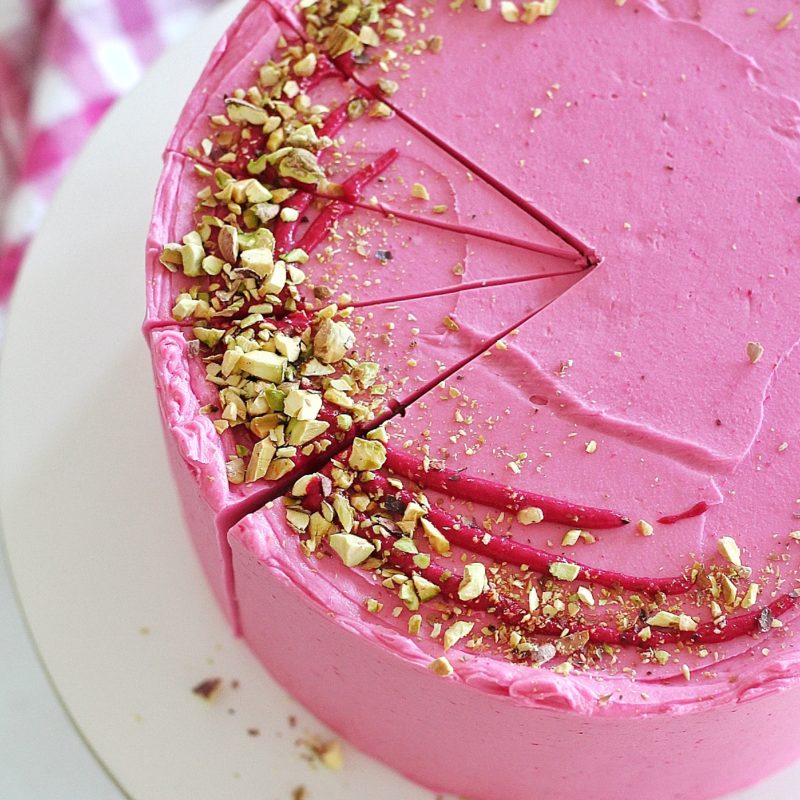 For the Whipped Ricotta Filling

For the Beet Puree

For the Beet Frosting

For the Beet Glaze

For the Whipped Ricotta Filling

For the Beet Puree

For the Beet Frosting

For the Beet Glaze