Peanut Butter Pie – inspired by the Magnolia Bakery Peanut Butter Pie, this decadent dessert is filled with a peanut butter cream cheese center on top of a graham cracker and pretzel crust with caramel sauce.

I know you’re scratching your head thinking, “what on earth is a pie recipe doing on Courtney’s blog?!” Yes, it’s true, I’m not a huge pie lover, HOWEVER, a pie with a graham cracker and pretzel crust is a pie I can stand behind!

Years ago I made a Magnolia Bakery Peanut Butter Pie that filled a deep-dish 9-inch pie pan with a Nilla wafer crust, peanut butter and cream cheese filling and caramel. It was heavenly! I haven’t had it in years and suddenly started dreaming about it. As I thought about looking for the recipe, I wondered if I could create my own version. I remember thinking the original was a little too rich for me (like, how is that even possible?).

So instead of hunting down the recipe, I decided to create my own version of this decadent dessert!

While I’m not one for a pastry pie crust, I love a cookie crust, a pretzel crust, or a graham cracker crust. Combine any of those two elements, and you’ve got yourself a serious winner in my book! Magnolia Bakery uses a Nilla wafer crust, but I decided to go with a mixture of a graham cracker and pretzel crust to maximize the sweet and salty flavor combinations.

To make the crust, you’ll simply combine all of the ingredients in a food processor and blend until you have a “wet sand-like” mixture. Once the crust is made, you’ll press the crumbs firmly into a pie pan. I used a deep-dish 8-inch pie pan, but a standard pie pan will work beautifully since this pie isn’t as thick as the original.

To make the filling, you’ll start by whipping the heavy whipping cream, powdered sugar and vanilla to stiff peaks. Next, grab another bowl and combine the cream cheese and peanut butter, and mix until combined. To finish, fold the whipped cream into the peanut butter mixture.

Before adding this incredible filling to the pie, you’ll first coat the crust with homemade caramel (see picture above). Again, just another element of sweet and salty that makes this pie so dang amazing!

This one is best served cold, so it’s a great dessert to make ahead of time. Just be sure to cover it and store in the refrigerator.

Truly an easy pie recipe you’ll love even if you don’t love pie! 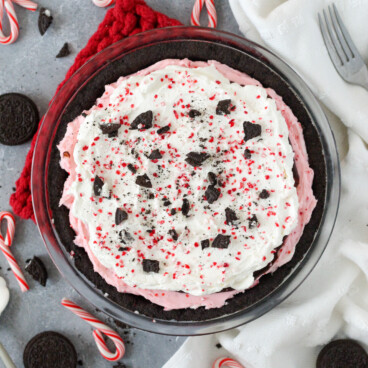 The Most Delicious and Easy-to-Make Peppermint Pie 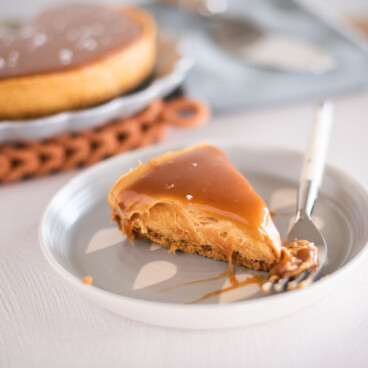 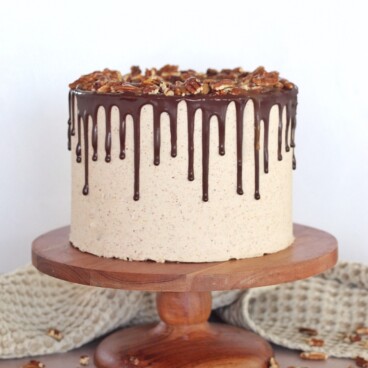 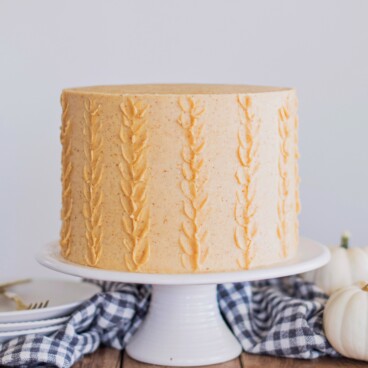